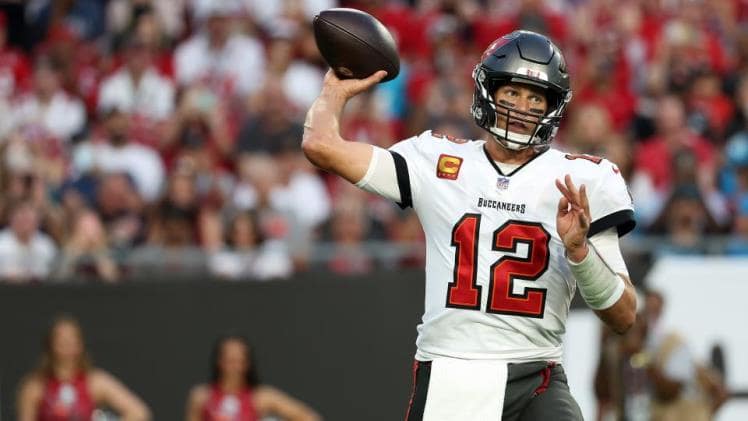 Tom Brady: From Unheralded NFL Draft Pick to the GOAT

A 44-year-old native of San Mateo, California, Tom Brady is the undeniable greatest National Football League (NFL) quarterback of all time. The fact he’s still playing into his mid-40s, and at a good level no less, is proof of that. But Brady is also the NFL stats all-time leader in several categories.

It’s remarkable to think that Brady is still setting records, despite the fact he’s been in the league since Trevor Lawrence, the number one overall pick in the 2021 NFL Draft, was one year old. Brady’s career trajectory is even more unlikely considering he didn’t have the profile as quarterbacks like Lawrence or Joe Burrow coming out of college.

Brady enrolled at the University of Michigan in 1996 and was the back-up to Brian Griese for much of his first two seasons. While the Wolverines have a solid nationally-ranked program, Brady was far from the most coveted quarterback in college football.

Those are hardly impressive numbers by today’s standards (both in college football and Brady’s own stats in the NFL), but the New England Patriots took a flier on him in the sixth round of the NFL Draft.

Brady wasn’t given anything in New England, which is to be expected as a sixth-round pick. He was the fourth-string QB in his rookie season but finished number two on the depth chart. He only completed one pass in his rookie season; tight end Rod Rutledge had the pleasure of making that completion.

However, Brady was thrust into the starter’s role as a second-year player after Drew Bledsoe suffered an injury and the Pats started the season 0-2. Brady was the team’s starter for the final six games of the season and led the team to its first Super Bowl in a surprise victory over “The Greatest Show on Turf” St. Louis Rams.

That was just the start of Brady’s dominance with the Patriots. Together, with coach Bill Belichick, Brady won six Super Bowls with the Patriots and firmly established himself as the greatest quarterback of all time. Yet, understanding that some people might have credited much of his success to Belichick’s coaching genius, Brady took a major leap in his early 40s and signed with the Tampa Bay Buccaneers.

Cementing His Legacy in Tampa Bay

Brady erased any doubt as to his status as the Greatest of All-Time (GOAT) in his first season in Tampa Bay in 2020. He threw for 4,633 yards and 40 touchdowns that season and was even better in the playoffs, leading Tampa Bay to a Super Bowl. He delivered what nobody, perhaps with the exception of himself, though he could do with a new system at age 42.

Brady’s Buccaneers were bounced in the playoffs in 2021, but he had an even better regular season than he did the year prior with 5,316 passing yards and 43 touchdowns.

Brady’s Endorsements and Net Worth

Brady has earned hundreds of millions of dollars in salary throughout his career and is one of the richest athletes in the world. He has a net worth of $250 million.

An incredibly marketable athlete, he has received more than $100 million in endorsements through brands like Upper Deck and Under Armour. He also reportedly has a deal in place with FOX to be an analyst when he retires that will pay him $375 million over 10 years.