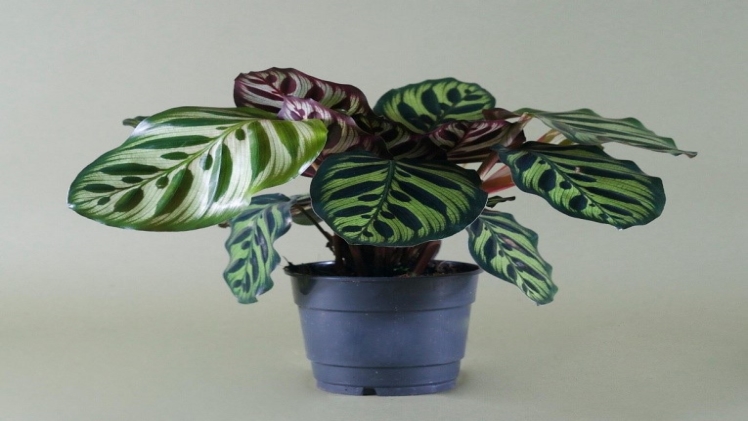 Calatheas are attractive tropical plants that grow well indoors and can brighten up your living space with their extraordinarily ornate foliage. Calathea is a flowering genus; however, it rarely blooms indoors and is more popular because of its vivid and radiant colors. The calathea plant features an extensive range of leaf shapes, forms, and colors. This includes varieties with striped or spotted leaves, variegated leaves, mottled leaves, and more.

Calathea genus name comes from the Latin term calathus, meaning “a cup” or “a chalice”. The leaves of Calathea fold up during the night and they are also referred to as Prayer plants because of this distinctive movement. Calathea loves to grow in moist soil conditions with high humidity and warm temperature. Most Calathea varieties require low to medium indirect sunlight to flourish.

Owing to their unique appearance, it’s not surprising that there are so many popular varieties of calathea available on the market. The following are a few of our favorite types!

One of the most popular types of Calathea, this variety is native to Brazil. Its colorful markings on egg-shaped leaves give Calathea Makoyana its common name, the Peacock Plant. This plant is renowned for its beautiful foliage, which contrasts shades of green and purple. There is nothing like the dark and colorful markings on the leaves of Calathea Makoyana to add interest and vibrancy to any environment.

It is important to take care of Calathea Makoyana well, to use a fertile potting mix that drains well, and to keep the soil evenly moist. High humidity (between 60°F and 75°F) is preferred over cooler temperatures, keep these plants out of areas with cold drafts.

All Calathea are sensitive to salt, including Calathea Makoyana. Soil that has been salted in response to other plantings should also be flushed before using with this species. Feed monthly and flush periodically of buildup, houseplant food at half-strength works well for both applications.

Calathea Makoyana can be grown indoors or outdoors, but it needs plenty of indirect sunlight and water. The plant can also be kept as a houseplant if you provide it with enough light and water. If it receives four hours of sunlight per day or more, it will grow well.

This variety of calathea is known for its attractive leaves, which are marked with dark pink streaks and spots. The leaves are also variegated, meaning that they feature a mix of colors – usually green and yellow or green and white. A large variety of plants can reach heights of up to 2 feet, but smaller varieties are also available. The leaves are more or less succulent when young but become thinner and less succulent as they age.

The plant requires bright indirect sunlight or some shade during the day so it can absorb enough light for photosynthesis while not getting too hot. The plant also has white spots in the center of each leaf, which gives it a unique look.

There are several varieties of calathea, but this one is probably the most challenging. It has dark green leaves with silver-colored veins on top with white undersides. The flowers are white and grow on high stems above the foliage. Bright lighting conditions are ideal for this plant, but it can tolerate lower levels of lighting as well. Water when soil becomes dry then allow it to dry out between waterings again (don’t overwater).

Round Leaf Calathea or Calathea Orbifolia is an attractive, but challenging plant to grow. Being less easygoing than its other family members, Calathea Orbifolia requires effort in order to stay radiant. It is a tropical plant that grows best in warm, humid climates. It can tolerate temperatures between 60 and 80 degrees Fahrenheit (16 to 27 degrees Celsius) with little to no fluctuation. This plant does not tolerate cold temperatures well and will die if exposed to freezing weather.

As one of the members of the Marantaceae family, Calathea Crocata is distinguished by its unique blooming behavior compared to other Calatheas. There are many Calathea species with lush green foliage and attractive designs, but Calathea Crocata is a particular favorite because of its bright orange-yellow flowers. Because of the colors and shapes of their flowers, they are also called

It can grow up to 2 feet tall, but it is best kept smaller if you want to keep it indoors as a houseplant. This variety does best if kept under bright light conditions but should not be exposed to full sunlight because it will burn its flowers easily if they get too much sun exposure.

The Calathea Zebra plant is an ornamental evergreen plant. A zebra-like pattern is created by the leaves of the Calathea Zebra plants, which have dark green velvety leaves striped with lime green. It is an excellent choice for growing indoors because it requires very little light and will tolerate low humidity levels. It also makes an attractive houseplant because it doesn’t have any serious pests or diseases that would affect other varieties of calathea plants.

The Zebra Plant requires low to medium light, so it is perfect for indoor spaces. Ideally, it should be kept between 60 and 80 degrees Fahrenheit. In order to keep it healthy, it should be kept moist, but not soggy. It can withstand occasional dry spells but should be watered when dry.

The Calathea Musaica has large, vibrant leaves that attract gardeners due to its beautiful foliage with dark and light patterns. This variety can be grown outdoors in warm climates but should be kept indoors if you live in an area that gets cold winters where temperatures dip below freezing at night (32° F).

Like most plants, they prefer to be watered when they are dry rather than over-watering them which can cause root rot problems later on down the road!

Calathea Lancifolia, or Rattlesnake plant, is another name for Goeppertia Insignis. They have distinctive spear-shaped leaves with a deep green color. The rattlesnake plant gets its name from the markings on its leaves, which resemble those on rattlesnakes. Additionally, its foliage is adorned with purple undersides, making it an eye-catching addition to any room. During the growing season, it requires frequent watering under low light conditions. Calathea lancifolia does not tolerate cold temperatures well, so it should not be exposed to temperatures below 60 degrees Fahrenheit for long periods of time. 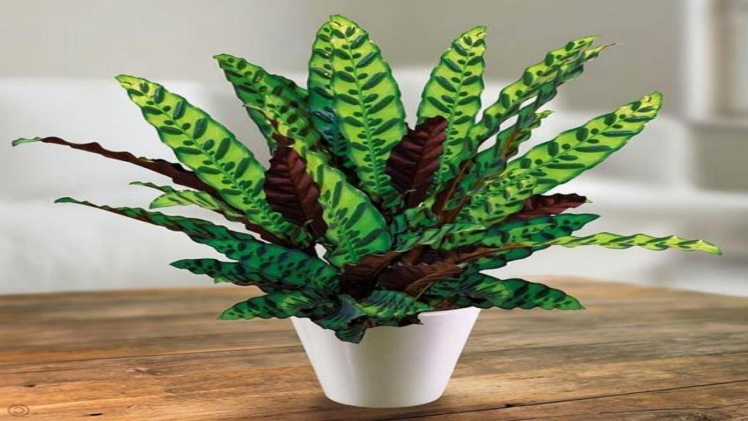 It can grow up to 1.5 inches tall with green leaves. This plant has a bushy appearance when fully grown, so it makes an excellent addition to your home’s decorative planters or any empty space in your home or office

What is the rarest Calathea?

The White Fusion Calathea is one of the rarest varieties. It has a unique leaf pattern, resembling a cross between a giant fern and a delicate lace fan. The plant itself has dark green leaves with white veins, making it appear like a living piece of art when displayed in your home or office.

What is the common name of Calathea?

Prayer plants or prayer leaf plants is another common name for this plant.

What is the easiest Calathea to grow?

Calathea lancifolia is considered one of the easiest varieties to grow indoors, even though it does require some care and attention to thrive properly indoors.

The calathea plant is a popular houseplant because it can be displayed in so many different ways. The most popular varieties of calathea are striking in their own unique way, and certain colors have been proven to have a positive impact on mental health, which makes them great indoor houseplants for homes and offices.