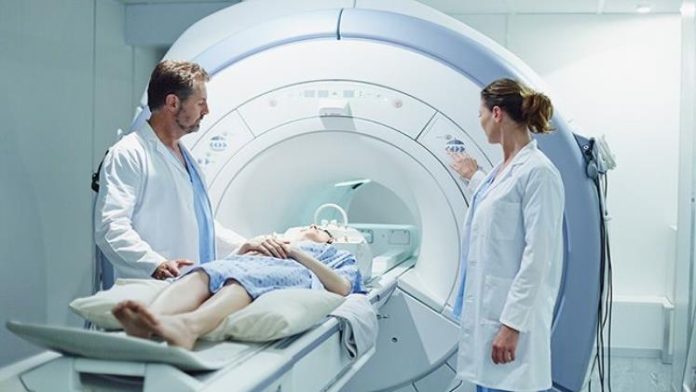 If you have recently had a fall, have injured your muscles, or are experiencing a degenerative disorder, like ankylosing spondylitis, your doctor or your rheumatologist will likely recommend that you undertake an MRI scan.

Magnetic Resonance Imaging (MRI) is a diagnostic imaging test that uses a combination of a strong magnetic field, radio waves, and a computer. This creates images of internal organs and structures within the body. Unlike X-rays or CT scans, MRI scans do not use ionizing radiation, which means there is no risk of radiation exposure. Great.

However, how exactly do these machines work and what can you expect when you are having an MRI taken? Here is a quick (and jargon-free) guide to how an MRI machine works.

The Beginning of the Scan

Whether it is in a hospital or via Express MRI, in the first instance, you will be asked to take off any magnetic metal jewelry, and you will usually be given a robe to wear. The person who is taking the images will also offer you earbuds or a headset to wear.

The MRI machine itself looks like a thick tube that you need to slide into the middle of, and for those who have claustrophobia, it can be a bit intimidating. However, in some cases, you may be able to be offered sedation. Once inside the machine, it is turned on, and it makes a lot of loud noises that some have compared to a bird chirping if it was made of metal. An MRI scan can last for up to an hour.

What the Machine Is Doing

The machine generates a strong magnetic field that aligns the hydrogen atoms in your body.

Next, radio waves are sent through the body, which causes the aligned hydrogen atoms to spin out of alignment. As these atoms return to the original alignment, they release energy in the form of radio waves, which are detected by the MRI machine’s antenna.

The information gathered by the antenna is then processed by a computer, which creates detailed images of the internal organs and structures within the body. These images can be viewed by a radiologist on a monitor and can be used to diagnose and monitor a variety of medical conditions.

The images can be taken in different planes, such as axial, coronal, sagittal, and oblique. The images can be in 2D or 3D and can be in the form of a still picture or a video. Also, MRI scans can be done with contrast agents to better highlight certain structures in the body.

What Can MRI Scans Diagnose?

An MRI scan can diagnose a wide range of issues.

MRI scans can be used to diagnose brain tumors, strokes, multiple sclerosis, and other conditions that affect the brain and spinal cord, such as aneurysms and clots.

They can be used to diagnose conditions, such as osteoarthritis, rheumatoid arthritis, and tendinitis, as well as injuries to the bones, tendons, and ligaments.

These scans may be used to diagnose heart disease, blockages in the blood vessels, and congenital heart defects, as well as used to diagnose and monitor cancer, including breast cancer, prostate cancer, and lung cancer.