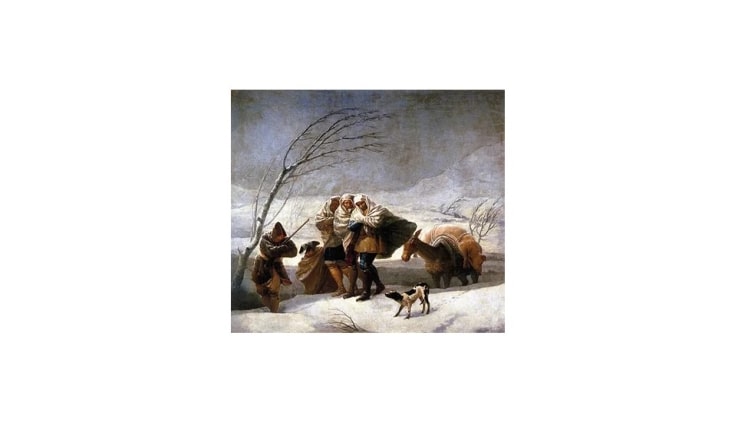 The Spanish painter Francisco de Goya was born on 30 March 1746. Art lovers and scholars consider him one of the most important Spanish artists of the late 1700s and early 1800s. Many important 19th- and 20th-century painters were influenced by his artwork. He is seen as the last of the Old Masters and the first of the moderns.

Apart from many landscapes and other artworks he created, he was a sought-after portrait painter of the Spanish Royal family and other aristocrats. Francisco Goya became a court painter for the Spanish Crown, and in 1799 he became “Primer Pintor de Cámara” (“Prime Court Painter”), the highest rank for a Spanish court painter. In 1795 he was also appointed Director of the Royal Academy.

But from 1793, he suffered an illness that left him deaf. In his later years, he was also disillusioned by some of the royal families and kings, and as a result, his artwork became “darker.” Finally, a stroke left him partly paralyzed, resulting in failing eyesight. His last artworks, the series of 14 paintings done as murals in his farmhouse, have become known as his “Black Paintings” and contain images of violence, despair, evil, and longing. He passed away on 16 April 1828 at age 82.

The House where the Murals were Created

In February 1819, Goya acquired a two-story villa on the banks of the River Manzanares. He lived there with Leocad Weiss, though she was still married to Isidoro Weiss. Some historians think he had a relationship with her and possibly a daughter. During this time, Goya began painting what later became known as the “Black Paintings.”

Art historians agree that the murals on both stories were painted over rural scenes containing small figures. Goya even used the “original” landscapes in some of his murals, such as “Fight with Cudgels.” However, it is not known whether Goya also did the original murals or whether the murals had been on the walls when he bought the house.

Many art scholars believe that Goya had painted them and that he later just painted over them. Other scholars think that a previous occupant of the villa did the murals. Whatever the truth, the “Black Paintings” murals dated from 1820 and were most probably finished by about 1823.

The villa walls had been covered in wallpaper, and Goya’s paintings were done on top of this. The paintings were saved as the wallpaper was carefully removed and transferred to canvas. This procedure started in 1874 at the request of Baron Emile d’ Erlanger, who wanted to sell them at the 1878-Paris World’s Fair. Nevertheless, in 1881 the baron donated the paintings to Spain. They are now on display at the Museo del Prado.

Stylistic Elements of the “Black Paintings”

In “A Pilgrimage to San Isidro,” the leading group is off-center to the left, and in “Procession of the Holy Office,” the top group is to the right. Finally, in “The Dog,” emptiness occupies most vertical space.

A second constant element is that most of the “Black Paintings” scenes are nocturnal. As a result, they all have a stark absence of light. Another characteristic is that the people’s faces present ecstatic or reflective attitudes – their eyes open and their mouths agape.

All these style elements demonstrate the characteristics considered nowadays to be the beginning of expressionism. Therefore, in this series, Goya went further than ever in realizing his revolutionary ideas. 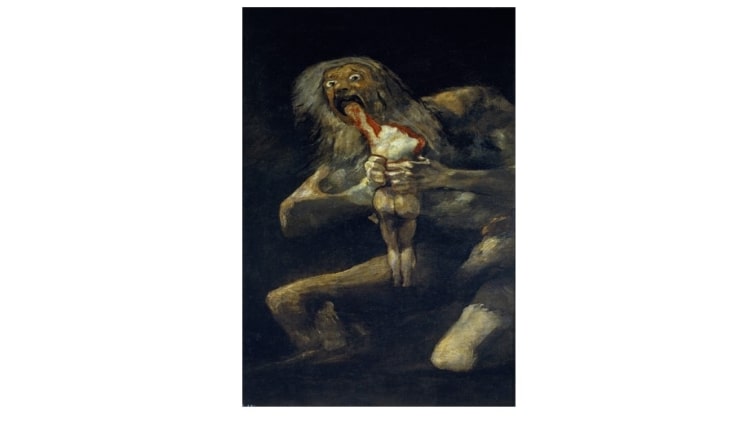 The background in the painting is black, and Saturn’s fingers dig into his child’s back, and he is about to take another bite of the body’s left arm. The only color used besides flesh tones is the splash of red blood covering the mutilated outline of the upper part of the body.

Another well-known painting by the artist Francisco Moya that is one of the 14 “Black Paintings” is “Witches’ Sabbath,” also known as “The Great He-Goat.” It is a gloomy and earth-toned illustration depicting the belief that the Sabbath was a meeting of witches supervised by the Devil.

The Devil is depicted as a goat, painted entirely in black. The witches and warlocks have sunken eyes and horrifying features. Only one girl seems resistant and sits on the far right but is also dressed in black.

For completeness, we’ll include the view of a few art historians led by Juan Jose Junquera. He is one of the art scholars questioning the authenticity of the “Black Paintings.” In 2003, he concluded that at least the paintings that have been taken from the walls on the second story could not have been painted by Goya.

He said that there is a new document describing the villa as having only one floor. The second floor was added to the house after Goya died. He speculates that Goya’s son may have created the paintings and that they have been passed off as the work of Goya for financial gain.

Most art historians disagree with Junquera’s theories, and it is widely accepted that the 14 “Black Paintings’ ‘ currently exhibited at the Museo del Prado are definitely Francisco Goya art.

The artist Francisco Goya was one of the most important painters in the late 1700s and early 1800s and created many masterpieces, including portraits of kings, royal families, and other Spanish aristocracy. But personal circumstances in his later life led to a “dark” period represented in the 14 paintings that have become known as the “Black Paintings.”

An Introduction to Age Calculator

WordPress Vs Wix Vs Shopify

How to Become a Freelance Writer: Steps to Start

How Much Does a Research Paper Writing Service Cost?